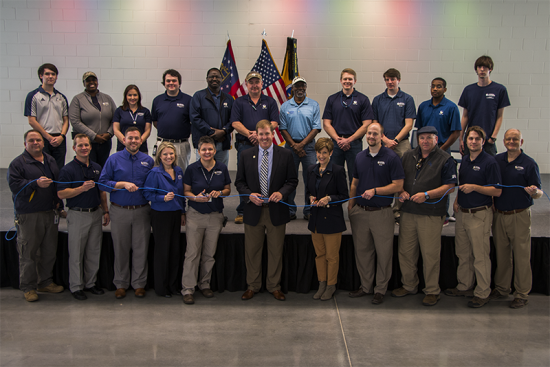 “State of the art,” “world class” and “cutting edge” are a few of the phrases that you’ll hear bouncing around the Georgia Southern University community if you ask about the new Military Science building, which opened its doors to students in January 2017. These phrases are descriptive not only of the facility’s construction and design, but of the sophisticated technology that helps make up the building’s infrastructure, as well. The IT planning phase of the building project began in November 2014 with one goal in mind: creating a learning environment that not only contains the Department of Military Science, but also connects it to the devices, resources, and features needed to educate and train the prestigious Army ROTC Eagle Battalion.

Sonya Chance, Associate Director for Academic Technology Support, says that the needs of the department were the first consideration in planning the hardware and software that would be installed in the building: “We met with the department early on to assess what their needs were–what they wanted to see in the classrooms, conference rooms, and throughout the building. Next we worked to find the best, most cost-effective equipment, developing efficiencies along the way.” These new efficiencies impact not only the Center for Academic Technology Support (CATS), but the end-users in the Department of Military Science, as well. 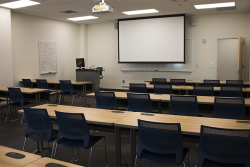 As part of the planning for the Military Science building, a new, streamlined process for installations in labs, conference rooms and classrooms was developed. All technology components in the five classrooms, conference room and computer lab are contained in cabinetry located in the rooms, providing ease of access for troubleshooting and less down-time for the department. New A/V framework, including an isolated VLAN, results in less programming and configuration for CATS support staff and a faster, more user-friendly experience for the department.

Bolstering the end-user experience is the intricate behind-the-scenes network infrastructure designed and installed by the Department of Networking & Telecommunications (NetTel). This infrastructure, winding its way between the walls and closets of this 33,280-square-foot facility, is not immediately noticeable. But while the students, faculty and staff working and learning in the Military Science building may not notice the the three data closets inside the facility, the services provided by the ten 48-port power-over-ethernet (POE) switches, three 12-port POE switches, three uninterruptible power supply (UPS) packages, Avaya telephone gateway, T-Link panel, and mini-computer they contain are undeniable, since these are the components that support networking, telephone, surveillance, cable TV, and life safety for the entire building and its occupants. 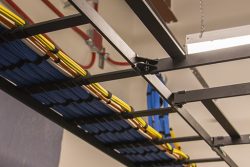 Behind-the-scenes network infrastructure provides the Military Science building with all of the technological components needed to support learning and safety.

Visitors to the Military Science building will also notice the enhanced wireless connectivity in the building–in addition to the 26 wireless access points throughout the building, the NetTel team installed four high-density wireless access points in the building’s 5,000-square-foot multipurpose room (designed to host ceremonies and training events), which will allow a large number of devices to connect to the wireless network at the same time while supporting higher bandwidth and better wifi performance in densely populated spaces. NetTel also collaborated with the University Police Department to install 12 Pelco IP security cameras inside the building and six Pelco Environmental IP cameras outside, improving campus safety along with user experience.

“I’m incredibly proud of the work you’ve done behind the scenes to enhance the learning experience and increase efficiencies for the Department of Military Science and this University,” Ron Stalnaker, CIO, said to the CATS and NetTel teams as they gathered for a “cable cutting” to celebrate their part in making construction and operation of the Military Science building a success. Mr. Stalnaker thanked the groups for their dedication, innovation and collaborative spirits, and encouraged them to look forward to serving the University community in future building projects.

Posted in Innovation, IT News, ITS Team Highlights, Latest News